A cozy tea-making game set in a post-colonial fantasy world. As a herbalist’s apprentice, serve magic elemental teas to influence a colourful cast of characters. Connect with your estranged home, discover your gifts, and find your place in a fractured, healing world.

This land is home to many beings that most humans cannot see.
These beings once taught us everything we know.
When people are born, they are adopted by a being who watches over them.
These beings may grant abilities, called Gifts.
These Gifts are meant to help all of us survive together, but they can be dangerous if a person has no mentor to teach them...

500 years ago, the Crown government arrived in this land, and after years of war, confined the People into surveilled slums. Talk about the Gifts was punished, and those with Gifts were taken away. The knowledge of how to use them and how to work with those beings was fractured and suppressed.

Now, 50 years after the fall of the Crown government, people everywhere are rebuilding their communities, remaking the abandoned cities, and forming new homes and structures of governance. There are few people left who know about or believe in the Gifts, and those who have them struggle to understand what they're experiencing.

You play as Awâsis, a healer's apprentice, as she learns how to use her Gift. Awâsis recently left Sonîsîpîhk city to move back to her mother's home community. Struggling with visions she can't control, and strained relationships with her family, she is taken in by the mysterious healer Matsi, who says she can teach her.

Awâsis sees people's moods as elements, and she can use plants to influence people by shifting them into a different element. Use her gift to influence the lives of a colourful cast of characters using the plants you gather. Your choices ripple out to affect people's relationships and the larger community's development. As you learn about new plants, you can find new reactions and storylines. People are not always who they seem to be.

A new demo will be available September 2022, with a full release coming later in February 2023!

I think this is one of my favorite game ideas I've ever experienced. Genuinely looking forward to more

i enjoyed this :) looking forward to the next chapter!

thank you so much! 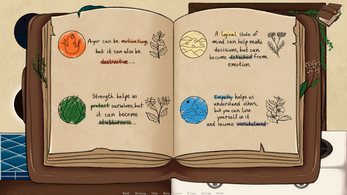 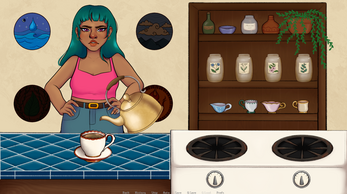